Safety is one of the most basic human needs, and the repeated occurrence of such attacks on helpless, and often arbitrarily chosen victims, takes away from people’s ability to trust that they will be relatively safe as they go out into their world.

The collective trauma that many Americans have experienced in bearing witness to such tragedies in schools and other public spaces, that either are part of their daily environment or resemble them closely, has caused many people to develop an ongoing defensive stance that can resemble the post-traumatic response of actual trauma survivors. Many people have understandably become more hypervigilant, less trusting of strangers, more isolated, more easily startled, and even more paranoid in spaces they once associated with safety and a positive sense of community. The rage and helplessness that are engendered by such acts of senseless violence, especially when they are in the news with increasing frequency, are difficult to resolve due to the relative powerlessness of individuals to make changes that can make them safer without totally isolating and paralyzing them.

When people can no longer presume relative safety on a daily basis, they may relate differently to others internally, become numb, or become preoccupied with preparing themselves for survival. Survival and self-protection are healthy natural instincts, but most of the time in non-traumatic lives they are not called on daily, because they make it so difficult to be present for the other aspects of life, and keep the mind/body in a hyper-sensitive state. While not all Americans feel this way as a result of the shootings, many may feel subtle changes in that direction that may not even be conscious, as traumatic responses often are not in full awareness.

The effects of hypervigilance

While it is statistically unlikely that you or someone you know will be involved in gun violence, the fact that we prepare regularly with drills keeps our minds and bodies in a state of hypervigilance. We can’t maintain those levels of stress and stay healthy, so we either go into denial and disconnect from what’s happening because we can’t change it anyway, or we stay in a heightened state of awareness, in anxiety. As a country, we have low levels of this happening right now as a part of the collective experience. And this is without us or our loved ones actually having been the victim of such violence.

The CDC reported in 2016 that there were an average of 30 gun related homicides per day in the USA, for a total of 11,000 homicides. The other 63 gun related deaths per day were suicides. These are not small numbers.

We’re all impacted by this violence that is becoming so common that some are beginning to confuse it with normal.

What’s happening in our bodies and our nervous systems?

Today I want to talk with you about what happens in our bodies and our nervous systems when we are collectively experiencing gun violence. I’m going to be talking about Stephen Porges’s Polyvagal theory, and the work of John Chitty, who has done a great job of helping to explain the way the nervous system really works. It’s important for you as an individual, and especially as a parent, to understand how this works and why it’s so important to talk to your kids about their experience of what’s happening for them.

The nervous system, according to the Polyvagal Theory, has 3 main parts: social, sympathetic and parasympathetic. For simplicity, we can look at them as connect, gas, and brake. They are set up from the newest to the oldest method of returning to safety.

The prime directive of our nervous system is to keep us safe.

When we have the perception of safety (whether we are actually safe or not, it’s about how we FEEL), our nervous system is not in a stress response. We need others and we need to be connected to them. We also need to be able to get out of bed in the morning and to slow down to go to sleep at night. Our nervous system works hard every day, and if we were to draw what its activity would look like normally, there would be a wave pattern. This is without extra stress, just normal daily life. The wave illustrates periods of activity followed by periods of rest, over and over.

Dr. Laura D. Miller, social worker and psychotherapist, was asked in an interview in December 2015:

CBSDC: “Will these mass shootings start to affect the everyday lives of Americans?”

MILLER: “Mass shootings have affected the lives of Americans in both tangible and intangible ways. If a critical mass of Americans are psychologically impacted and see their communities as unsafe as a result, they will naturally prepare for the perceived danger. This can impact the culture as people relate to each other differently, since no one knows whom they should trust and people feel at least subconsciously on edge.

We are also impacted concurrently through shooting drills in public spaces in which people are reminded of the need to prepare for an attack. While this preparation helps people feel more protected and in control, it also reminds them of the looming danger. They are asked to visualize their worst nightmares and this can flood them with emotions that are difficult to process when nothing has actually happened to them directly.

Discourse about mass shootings has become ubiquitous, which can join people together in collective mourning, but also makes people more cognizant of the ever-present danger. It feels more emotionally near even though it is still so statistically unlikely.”

Back to our nervous systems

So what happens when we’re faced with so much violence and nothing is happening to change it or re-establish safety? Let’s look back at our nervous system to see.

As Dr. Miller mentioned, we have more of a distrust of others right now because we don’t know who is safe and who is not. This might be subtle or overt, but it makes us less likely to turn to others to calm our stress response. Add in the uncertainty of the response we’re likely to get from others, and we are pulling inward and not reaching out. Even if it is subtle, our kids are going to feel that. This increases isolation. This is the Old Story I talked about last week. And this is why it’s so important that we are working to stay connected to our kids, and help them regulate through that social branch of the nervous system.

Kids who are feeling unsafe and haven’t been able to be reassured by the adults (mostly because we don’t know what they’re showing us) will move into sympathetic stress. They may be anxious. They may lash out and be violent. Especially children who have other ACEs (Adverse Childhood Experiences) may have already learned that it isn’t safe to try to connect with adults. When someone can connect with them using the social branch of the nervous system, they can calm and return to a normal pattern.

Kids who can use that sympathetic stress response to do something and be a part of active change – whether it becomes a choice about where they go to school or writing letters to lawmakers – this is using the energy that’s mobilized by the sympathetic nervous system. Kids at Marjory Stoneman Douglas in Parkland, FL are tapping into this sympathetic response to try to make changes to keep themselves safe because they weren’t kept safe.

I read a Facebook post about an 8-year-old girl who had asked for new shoes. Her mom thought she just wanted the latest style, but she said that she wanted shoes that don’t light up because if there’s a shooter in her school, she didn’t want the lights on her shoes to give up her hiding spot. It’s a toss-up about whether this is sympathetic (doing something) or parasympathetic (giving up).

We need to recognize that this is where we are collectively. There are times when it is time to stand up, to use that stress response to make changes, and the time is now.

In the meantime, you can pay attention to where your kids seem to be with what’s happening. Are they afraid of going to school? Are they thinking about people with guns and what they would do if there was a shooter in their school? What is it like for them to be in a drill? Where are they in their nervous system right now? Connecting with them can help calm their stress responses. It’s the best thing you can do for your kids and your family right now.

If you’d like some additional support for parenting in a way that focuses on the relationship and understanding the behavior, check out Consciously Parenting 101. It’s an on demand, a pay-what-you-can program, so you can determine what you can afford for the class, and it’s at your own pace. Check it out and see if it feels like a good fit for you right now.

Resources from this Episode

On-Demand Course: Consciously Parenting 101 (pay what you can) 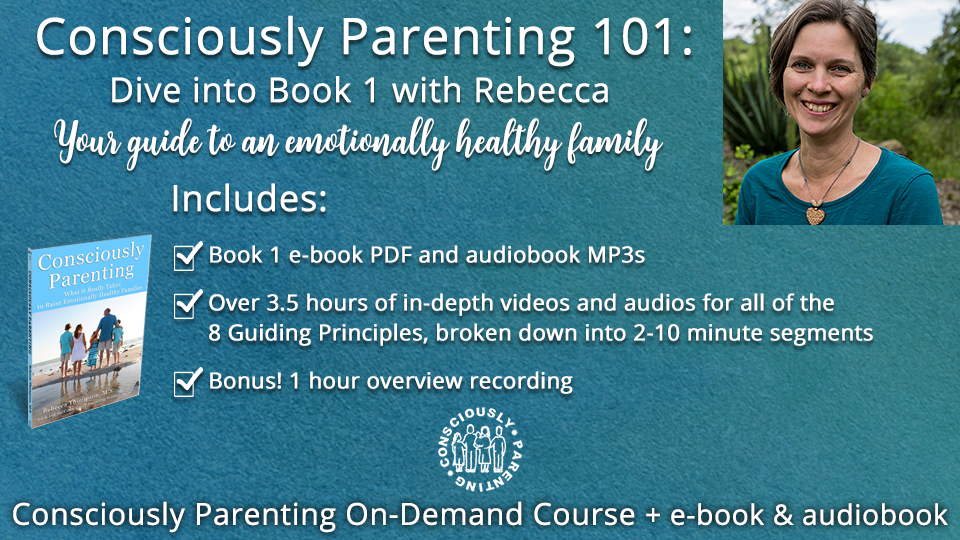